Fill with joy and happiness by discovering and realizing potential.

Mutual understanding through learning the history of U.S.-Japan friendship Japanese emigration history and the American who supported it

As one specific effort in our mission of “Promoting Mutual Understanding among Mankind,” One Associates presented the Japan International Cooperation Agency (JICA) in 2012 with historical mementos of the United States-Japan friendship. The mementos were originally owned by Robert W. Irwin, a fifth-generation direct descendant of Benjamin Franklin who served in Japan as the minister plenipotentiary and Consul General of the Kingdom of Hawaii. Our close relationship with Irwin’s granddaughter, Ms. Yukiko Irwin, led to her enstrusting the mementos to James Hayase. Ms. Irwin is author of the book Franklin no Kajitsu. She is also famous for having spread the Eastern medicinal art of Shiatzu in the United States. 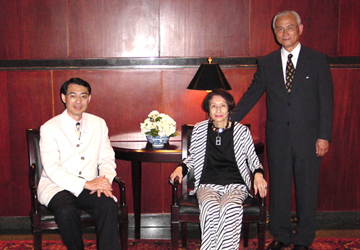 From left
James Hayase / Ms. Yukiko Irwin / Gen-ya Asama
Robert Irwin landed in Yokohama in 1866, eventually marrying a Japanese woman named Iki Takechi. He loved the nation of Japan and made many great accomplishments on its behalf, including promotion of mass Japanese emigration to Hawaii as that kingdom’s Minister Plenipotentiary and Consul General. Historical records describe him as the father of the Hawaiian Kanyaku Imin emigration program. These and other achievements led to Robert Irwin receiving commendation medals from both Emperor Meiji of Japan and the King of Hawaii, Kalakaua. These medals help tell the story of how U.S.-Japan relations deepened significantly during the Meiji Era (1868-1912). 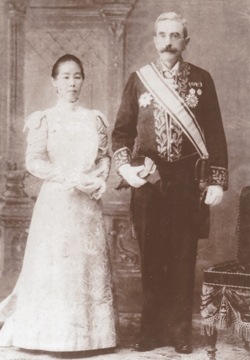 Robert W. Irwin, Minister Plenipotentiary of the Kingdom of Hawaii and his wife, Iki, attending the promulgation ceremony of the Meiji Constitution (February, 1889)

Hoping to make U.S.-Japan history better known to the world, Ms. Irwin asked that the medals, which she had come to own, be gifted to JICA. The gifted medals are now on permanent display at JICA’s Japanese Overseas Migration Museum in Yokohama. We hope that many people will have the opportunity to view these important items.

One Associates will continue to fulfill its mission of Promoting Mutual Understanding among Mankind by promoting knowledge of these precious reminders of the friendship between two great nations. 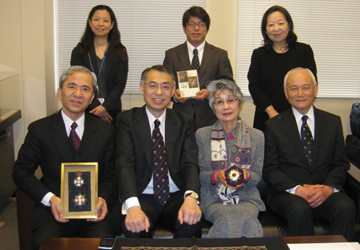